Main Menu
"Don’t get me wrong: I love music. I even spent years trawling the Machiavellian cesspit of the music industry as a record company executive with an insatiable appetite for vinyl, but when it comes to muzak being played in restaurants, to paraphrase the late Amy Winehouse, “I say no, no, no”. Defined by the dictionary […]"

EAT THE DJ: WHY PLAYLISTS IN RESTAURANTS SUCK


Don’t get me wrong: I love music. I even spent years trawling the Machiavellian cesspit of the music industry as a record company executive with an insatiable appetite for vinyl, but when it comes to muzak being played in restaurants, to paraphrase the late Amy Winehouse, “I say no, no, no”. Defined by the dictionary as ‘recorded light background music played through speakers in public places’, restaurateurs who think it good practice to soundtrack strangers’ meals with the aural equivalent of death by a thousand cuts are in need of psychiatric evaluation.

“Given the option of Ed Sheeran’s “Castle on the Hill” played ad infinitum or waterboarding, I know which I’d choose.”

Given music’s ability to overwhelm with sudden emotion, I’m regularly aghast at how carelessly it’s used. I’m sure London’s Eat Tokyo chain doesn’t realise the visceral feelings of doom its melancholic muzak evokes – might they add the Samaritans’ details to the bottom of receipts as a courtesy to traumatised customers? More upmarket, The Ritz charges a mighty £35 per diner for their house band playing “swing favourites from the Rat Pack” in their Michelin-starred restaurant. I’d happily pay double to never hear such mind-numbing schmaltz. Hell, even the CIA understands music’s potential for psychological torture, inflicting hours of excruciating pop awfulness on the hapless inmates of Abu Ghraib. Given the option of Ed Sheeran’s “Castle on the Hill” played ad infinitum or waterboarding, I know which I’d choose. 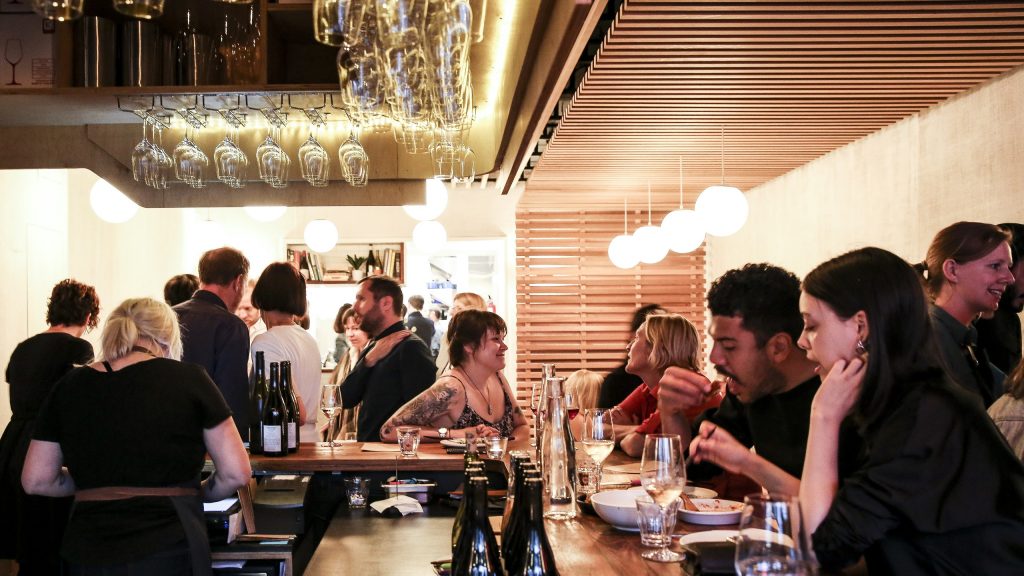 Of course, there are always exceptions, where even an inappropriate playlist can’t stand in the way of an inspirational meal.

I was recently soundtracked by Cornish sea shanties, a dinner-jazz version of “The Holly and the Ivy” (in late March), and what can only be described as the British National Anthem played on a recorder by a small child in an enormous metal bucket.

But it’s not just muzak in restaurants that’s wrong: playing any music so loud that no one can hear what their dining companions are saying is an error of epic proportions. A new restaurant I like played no music at all, eventually installing a record player (Paul Simon, early Elton…oh, aren’t they the cool kids) in the less-structured confines of the bar. Although it can be useful to play music at the start of service when a restaurant is quiet, the remain unconvinced that anything other than conversation need accompany Ramonet Chassagne-Montrachet and a slip sole cooked in smoked butter.

“Early on at the Four Horsemen we decided that the music wouldn’t be very loud to make sure it was a place you could talk,” says musician-turned-restaurateur James Murphy of LCD Soundsystem about his Brooklyn wine bar. “Music doesn’t have to play an important role in a restaurant, but it often does. It’s a bit like a film soundtrack, which can either insult you by telling you how to feel, or complement the moment. Sometimes I’m eating some nice but not entirely thoughtful hipster food and the place is banging Master P or something, and I think, “OK, buddy, I get it. Take it down a notch. I’m not here to eat the DJ”.

To quote the great Amy Winehouse, when asked if she listened to the queen of muzak, Dido: “I’d rather pour bleach in my ears.”.

One restaurant where it’s hard not to “eat the DJ” is London’s Black Axe Mangal, where a soundtrack featuring Kiss, Metallica and Motley Crtte played at eardrum-popping volume is as much part of the experience as the delicious lamb offal flatbreads. “When I opened Black Axe I realised I could do what I like, and what I like is to listen to very loud heavy metal during service,” shouts owner/ chef Lee Tieman over Nirvana’s seminal “Negative Creep”. “Some people don’t like the music and leave straight away. But, like the bright pink penises we painted on the floor, it acts as a kind of barrier to the type of person who probably shouldn’t come.” Lee’s ex-employers, Trevor Gulliver and Fergus Henderson from St John, are fans of his new direction, although it’s somewhat at odds with their own restaurant’s famous no-music policy. “I can’t imagine Black Axe Mangal or New York’s Momofuku Sam Bar without music,” says Trevor. “These are places with a lively vibe, where the music is properly…I won’t say ‘curated’, but you know what I mean, and a part of what’s at the heart of the restaurant – with or without tattoos!” Likewise Russell Norman, a restaurateur with an eye (and an ear) for detail, puts great stock in a tastefully chosen playlist. “I hate going into places and simply getting a bartender’s iPhone. I’ve overseen the playlists at Polpo and Spuntino, with suggestions from staff, and there’s now enough music to play for eight days uninterrupted, and to never hear the same song twice. The biggest compliment I get is when I see people standing on chairs, Shazaming next to the speaker and Vivino-ing the wine.”

No doubt well-chosen playlists enhance these environments, but if I ever have to eat lunch to a dinner-jazz cover of “The Holly and the Ivy” again, I’m liable to commit murder. Does anyone really believe dreary carols, Rat Pack schmaltz and pop nonsense competes with the world’s best restaurant soundtrack, the rumble of lively conversation? To quote the great Amy Winehouse once again, when asked if she listened to the queen of muzak, Dido: “I’d rather pour bleach in my ears.”.