Main Menu
"“Sickest drop of darkside Gqom house outta modern day South Africa!” An album description like this shouldn’t come as a surprise if you’ve ever visited the British online record store: Boomkat. The 13-year old shop, and sometime distributor, specializes in underground, obscure, artistic, alternative and niche genres. While most of their vinyl, CD and digital […]"


“Sickest drop of darkside Gqom house outta modern day South Africa!” An album description like this shouldn’t come as a surprise if you’ve ever visited the British online record store: Boomkat. The 13-year old shop, and sometime distributor, specializes in underground, obscure, artistic, alternative and niche genres. While most of their vinyl, CD and digital downloads are nowadays often variations of different electronic sub-genres, they’ve got folk, indie, hip-hop and modern classical music releases as well.

“Boomkat’s selection isn’t for everyone, to say the least”

Boomkat’s selection isn’t for everyone, to say the least. While I was making music back in 2006, Boomkat’s catalogue was an important resource since I discovered that many blogs and music publications, most famously Pitchfork, often picked up an undiscovered artist from the shop and made it their latest hype. Back then, I was deep into instrumental hip-hop and Boomkat were the one to go for if you wanted the alternatives, to go beyond DJ Shadow or RJD2. Now, just like then, Boomkat’s catalogue feels meticulously handpicked, and few of the albums are added based on demand alone.

However, it’s a thin line between artistic beauty and pretentious bullshit. And it’s up to you to decide which is which, since Boomkat’s selection makes you question what is progressive and good music versus unique but simply put, uncompelling noise. Below is one of their recent highlighted recommendations, terrifyingly questionable as a piece of music to my ears. Or as they describe it “[the] most curious sensations, visceral melodies, harmonic convolutions and polymetric timings you’ll likely hear this year.”

But like any other underground music genre, patience is a virtue. Spending time, browsing and listening to a bunch of samples has a huge payoff. Discovering that track or artist that hits you like no other music has done, is a magical experience. And with reasonable prices and without deliberately focusing on limited editions of various kinds, Boomkat is a unique shopping experience.

Online Shop
Boomkat’s design hasn’t made any significant changes since they launched, but it works. They’re tremendously good at photographing their record sleeves, and since many of the albums feature beautiful artwork on the sleeves, it makes for a very luscious presentation. They’ve got a custom music player which, similar to Soundcloud, doesn’t interrupt or reset while browsing the site; but why the tracks include a very annoying watermark bleep-sound is beyond me.

Browsing the different genres works but I would have preferred to have special tags to narrow down searches, since genres like hip-hop and Indie are too broad when it comes to the different variations. It also lacks a section that lists all releases which are on sale.

Gorgeous photos of their catalogue is a big part of Boomkat’s selling point and make physical formats come alive. A smart move, when most online retailers rely on the default press cover.

Selection
As mentioned, the shop carries the alternative to the alternative. While you’ll find more mainstream artists such as Jamie XX and Marc Demarco, they are few and far between. This is all about spending time browsing, not being afraid of experiencing something new and leaving the hype train at the door. While their recommendation section and newsletter is intriguing, I’ve personally had little use for it.

Unlike many, and especially new, niche online record stores, Boomkat doesn’t push for limited editions as their selling point. It feels refreshing and less intrusive to not be bombarded with how many colored, splattered or signed vinyls there are left. However, Boomkat does have a very loyal fan base and items will be sold out quickly if the right forum or site decides to highlight it. This gets particularly noticeable as Boomkat doesn’t remove sold out items. While browsing, I’m reminded that yes – there’s a lot of items from years back that originally had a price tag of £15 but now go for hundreds of dollars on eBay.

“Sometimes I do want to feel special”

If you decide on buying everything as physical copies, like me, do know that there’s nothing really exclusive about the actual music on the records. Most, if not all releases, are available as digital downloads which means that it’s neither an artistic desire or creative expression to actually release it on one format. Sometimes I do want to feel special, being one of the few who can play the grimiest grime on my turntable with my limited 12″. The Vinyl Factory does this, even if their releases are generally more expensive.

Shipping
Shipping vinyl is always difficult, as sleeves are easily damaged. Boomkat, similar to The Vinyl Factory, ship the record and its thin paper sleeve outside of the actual hardcover sleeve. This has its benefits, but it also easily damages the inner sleeve as it moves around when shipped. If it’s a nice inner sleeve, you’re likely to have it damaged. And since Boomkat’s audience consists of a lot of collectors, it wouldn’t be too much to ask for an extra, throwaway paper sleeve to ship the actual record in.

When I ordered one vinyl, it was delivered safely, wrapped around two cardboards and a thin layer of foam. However, when being sent eight records in one package, the same packaging technique was used, which resulted in minor corner bumps on nearly every sleeve, see photo below. No extra padding or foam was used, which had clearly taken a toll on the records due to the total weight. 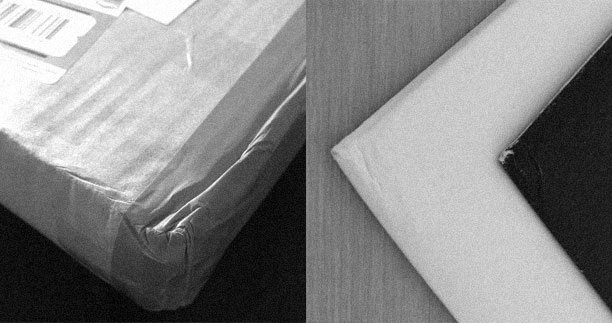 Minor bumps, but no longer in mint condition.

Bumps on record sleeves are very difficult to avoid, even your local record store is filled with brand new records which somewhere along the line have had minor damage done to them. But with Boomkat’s niche audience in mind, I would have definitely preferred a better packaging solution. Boomkat’s support mentions that you can have your records sent to you with extra padding, but you have to make a special request and I’ve yet to try it out.

Support
Searching and reading up on different forums I found that there’s very few complaints about Boomkat’s support. While they don’t answer questions via their social media accounts, I’ve never waited more than 24 hours to get an email reply. I’ve seen complaints about transcoded MP3’s being sold, but have yet to find any actual proof or legitimate spectral to claim it as fact.

Summary
It’s astonishing that years later, Boomkat still exist – without relying on any mainstream trends. Back when Boomkat became an established name among music nerds, vinyl wasn’t very popular and I do hope the recent surge does affect their business, as they are worth it. Pretentious, artistic, niche and beautiful.