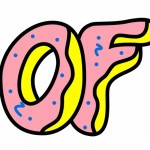 A group for following the music and members of LA Hip-hop collective Odd Future such as Tyler The Creator, Earl Sweatshirt, Hodgy Beats and all the other members.