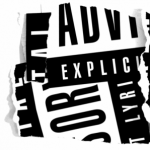 A group that partakes in the discussion of Rap and Hip-Hop culture.
-Which upcoming artists are you hyped for?
-Who’s hot and who’s not?
All that and probably more here.