The Apparent Bond Between Football and Music 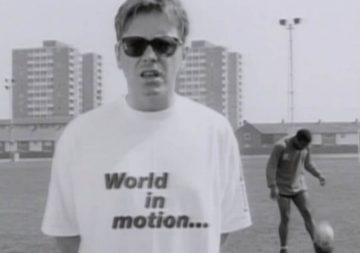 The relationship between music and sports, and particularly between music and football is apparent; somewhat co-related. Looking at them from every perspective, they are both responsible for stirring different emotions globally, to people from all walks of life, all cultures, irrespective of race and religion. For ages, from the time football was invented, music accompanied the sport, and stadiums were dull without music. Songs were played before kick-off, songs were played to celebrate goals, and songs were played to keep players going.

Flash-forward to modern day, nothing brings out the real emotion of football fans in stadiums like music does. Forget the customary national anthems, that could be just that; customary. Imagine the popular Mexican wave going round the Macarena without a rhythmic tune, South Africans blowing Vuvuzelas without song and dance from the Zulus, or a World Cup opening ceremony without a musical show by a renowned artist. Unimaginable right? That is the unique synergy between the two.

Fans drawn from all across the globe find a lot of fun in football-related activities, for example, Betway Zambia betting gives betting lovers the opportunities to follow sporting events in style. Enjoying watching your favorite teams playing, and at the same time placing bets on the same is rewarding, and always so much fun. Spice that up with some music before a match, at half time, or after the final whistle.

Top football clubs around the world have their identities in music, where their staunchest fans outdo each other with tunes of team anthems. Liverpool Football Club are the current European Champions and the bookies favorite to clinch the elusive English Premier League title this season according to Betway. The “You’ll Never Walk Alone” rendition is usually played before matches at Liverpool’s Anfield home, and opposing coaches agree to the intimidating effect of the tune. Giants have fallen at Anfield, teams have been battered, all thanks to the loud fans singing the popular track to awaken the ghosts of Anfield. Former coach Rafael Benitez once noted that playing Liverpool at home was like playing against 12 men due the atmosphere charged by a song.

Giovanni Trapattoni, a globally-renowned coach pointed out that music is capable of making one a better player. Learning a thing or two about the tempo and the rhythm goes a long way in horning essential logical skills of the game.

If you remember the France World Cup triumph in 1998, the Allez Blues tune became a hit. Not because of its appeal as a great track, but largely because of its connections with the winning French side. Shakira did the Waka Waka track for the 2010 World Cup staged in South Africa, the first to be held in the continent, and to this date, the sound of it brings back the memories of the event held some years ago.

In a nutshell, music and football have become inseparable over the years, and the bond only seems to grow stronger. From the fans to the players, music looks so much a big part of the jigsaw, and has certainly propelled the growth of the sport in many aspects, from marketing to developing partnerships.