Main Menu
"  Not kidding about the guacamole thing. I want my kids to ask for my secret recipe before I die so it can be passed on.#GuacForLeaks — Has it Leaked (@hasitleaked) July 5, 2016 Asking for recipes on a Twitter account dedicated to music related topics. There’s five guacamole related tweets in a row. And […]" 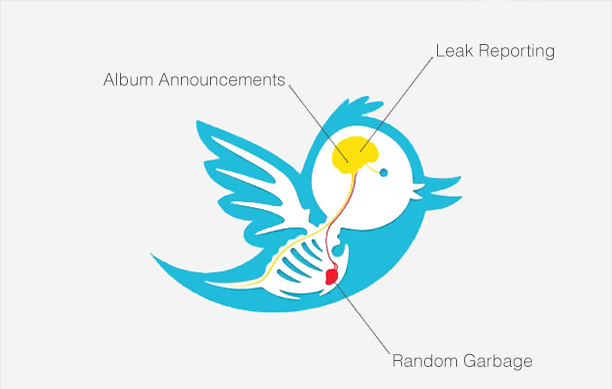 Not kidding about the guacamole thing.
I want my kids to ask for my secret recipe before I die so it can be passed on.#GuacForLeaks

Asking for recipes on a Twitter account dedicated to music related topics. There’s five guacamole related tweets in a row. And most likely thinking the hashtag #GuacForLeaks is hilarious.

Did you know, that I the admin of Has it Leaked did a remix for #Radiohead back in the day? https://t.co/AzUMiVyaIa #yup

Going beyond humble brags, to down right promoting and bragging about doing a remix five years ago. As you can see, one person liked this tweet ouf of 40k followers. Plus the fact the tweet refers to “I the admin” which implies there’s a great deal of credibility to that title.

Final rant. @newreleasesblog @whatcd @wafflesfm etc Youre doing nothing to stay creative and NOTHING to actually discuss with artists/labels

Being drunk and using the Twitter account to let out steam. And pissing off a site like What, which host and is the source of many of the leaks reported by the site, and is much larger than Has it Leaked. Also note that this tweet got liked by the same person who liked the tweet about the remix. I call that like “feeling sorry for the guy”.

Sorry for showing down @OnlyMusicPod in your throat. Will take a break. Just so proud :) pic.twitter.com/72wtjSjd6I

Apart from misspelling “shove”, the frequent promoting of the self-produced and co-hosted podcast. Note that this tweet mentioned “Will take a brake”, which lasted 24 hours tops. And the cringe worthy “Just so proud”. Also, why the picture? Probably a good hair day, just to squeeze in some more self-indulgence.

Leak corrections, and retractions. The amount of times this has been promised to be fixed can be traced back to when the account initially started reporting leaks.

And in a Kaufman-esque way, this article reeks of “wouldn’t it be funny if I made fun of myself” hipster/Vice attitude which should be banned. And especially not included on a site about music.