Main Menu
"Recently Beach House’s album Bloom, was found on the P2P network, Soulseek, two months in advance of the album’s official release. While the label is trying to cover it up, deleting file sharing links left and right, once something leaks onto the internet, it is too late to stop the album from being available. Every link that […]"


Recently Beach House’s album Bloom, was found on the P2P network, Soulseek, two months in advance of the album’s official release. While the label is trying to cover it up, deleting file sharing links left and right, once something leaks onto the internet, it is too late to stop the album from being available. Every link that gets taken down is reposted by someone else within minutes. I can’t help to feel sorry for the band, since it’s tough to convince fans to buy an album which has been freely available for weeks. But Beach House isn’t alone, as there have been some big and surprisingly free album downloads. Here’s a few of the most memorable and odd ones.

A special thanks to Sean May, for helping me with the article.

The hugely anticipated follow up to the French electro duo’s masterpiece Discovery leaked months ahead of its intended release. Daft Punk has been subject to fake album leaks throughout their releases, the most memorable being the numerous fake Tron soundtrack leaks. Interestingly enough, some of those leaks, although fake, were pretty impressive. The problem with the Human After All album leak was that a lot of fans thought it was fake due to the fact that it wasn’t up to the same quality as Daft Punk’s previous releases. As a reviewer from Sputnik put it:

[quote] “Most fans did not believe that it was actually Human After All, many fans warned others not to download the leak because it was a fake. They proclaimed it sounded too cheap and dirty to be the real thing, and that the sound just did not fit Daft Punk at all. Little did they know, they were listening to the real thing.” [/quote]

It turned out that the leaked version was indeed the final version. While the album will go down as one of Daft Punk’s more minor works, it did included the oh so sweet tracks “Make Love” and “Robot Rock“.

At a Las Vegas gig in 2002, UK britpop act Oasis premiered tracks from their forthcoming album Heathen Chemistry, but because all of the eleven album tracks had turned up early on filesharing networks almost three months earlier, the crowd sang along with the songs. This made lead singer Liam Gallagher, in one of his signature tirades, declare the audience “thieving bastards”.

Noel Gallagher, the lead songwriter for Oasis, declared that the version which had been leaked wasn’t the final version, and that the finished effort would be vastly different. This turned out to less than true, since only two songs were different on the retail version. Making both the leaked and the official version as bland as their previous effort, Standing on the Shoulders of Giants.

Some say that the blame for the leak could be blamed on then-drummer Alan White’s, since he apparently gave an advance copy to an NME reporter. Soon after, the drummer was sacked from the band, with Noel commenting that “In the end he fucked off and we haven’t seen him since.”

Late last year, the first single from Madonna’s upcoming album MDNA, “Give Me All Your Luvin”  leaked. But this is far from the first time Madonna has been troubled by early versions of her songs hitting the net early. In 2003, during the heyday of filesharing programs like KaZaA, the artist tried to combat leaks by uploading her own fake versions of the tracks on P2P networks. Madonna wasn’t too happy about her previous album Music, had leaked out early and tried to do something about it. When users downloaded what they believed to be her upcoming album American Life, they were greeted by MP3s with Madonna stating:

“What the fuck do you think you’re doing?”

The statement looped over and over, in an attempt to confuse file sharers. The problem was that Madonna ended up pissing off the wrong nerds. A few days later, Madonna’s official website was hacked, linking to downloads of the album’s tracks. For a total of fifteen hours the downloads were freely available accompanied by the following message

“This is what the fuck I think I’m doing.” 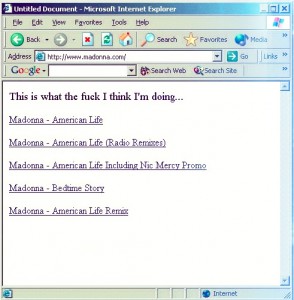 Which album leaks do you remember?

Hopefully we’ll do a second part to this article. So let us know in the comments – Which album leaks do you think are worth bringing up?