Main Menu
"  A$AP Rocky – Long.Live.A$AP by Matt Doyle   A leak coming from left field, sees Harlem rapper A$AP Rocky’s debut album released to the masses more than a month ahead of schedule. Is he here to stay? Or is he going to fall back into the Mob. The album opens in a less than […]"

“He stands alone as the guy who can play for both teams, combining blistering hard-hitting verses with catchy club anthems.”

A leak coming from left field, sees Harlem rapper A$AP Rocky’s debut album released to the masses more than a month ahead of schedule. Is he here to stay? Or is he going to fall back into the Mob.

The album opens in a less than auspicious means through the titular track. A$AP slightly limps through a toneless vocal hook, between clumsy sample transitions. Rocky’s still giving a strong lyrical showing, but the listless ‘hook’ may have been a bridge too far for Rocky. First single, ‘Goldie’ however, more than makes up for the weak opening. Flawless mixing of a constant tectonic sample and industrial sounding drumbeats from Hit-Boy create an almost house backing track to A$AP’s gassing.

Here, and on “PMW (All I Really Need)”, we can see apparent nods being made to Odd Future through the use of understated, distorted samples and the disembodied pitch-black baritone hooks. To me, the deep voiced cameos became slightly extracting, as it makes an appearance on almost every track in some form, but one can say that it smacks of Rocky taking an aspect of the rap game and forming it to fit his vision, a feature present everywhere in this album. 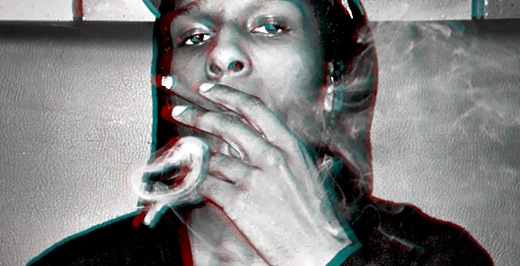 A$AP can even bring out the monster in the usually melancholic Drake on banger “Fuckin’ Problems” to fit his ideology. From the infectious beat to the hypnotic, schizophrenically shot video, Rocky shows that he can make the step into the club scene that so many rappers turn their nose up at or don’t pull off.

Rocky even said himself that to do a track with guys like Drake and 2 Chainz would not have happened a year ago in the days of his mixtape release “Live Love A$AP”. “It’s maturity – I’m matured, the content is a little different, it’s a lot of the same sounds. I’m just experimenting, and it’s really like what I do”.

This experimentation and maturity is obvious from one look at the range of producers and ergo production styles in this album. The fact that producers including Danger Mouse, Skrillex and Clams Casino can lay down the foundations, and Rocky can flow to it, is testament to his flexible stylings and growing stature in the music business. I personally took immense pleasure from Clams Casino’s  lo-fi electronic drone beats on “Hell” and “LVL”, providing a raw irony to Rocky’s verses.

With so much talent contributing to this release, A$AP runs the risk of being upstaged on his own record at times. This can be to its detriment on occasion though; namely on “Wild for the Night” featuring Skrillex’s producing presence. It seems odd to refer to a song succeeding tracks like “PussyMoneyWeed (All I Really Need)” and “Fuckin’ Problem” as being over the top, but here we are. “Wild…” comes across like some sort of neon-clad laser-spouting werewolf, alien from Rocky’s previous pitches.

Falling into the background of your own track can however be used to devastating effect, seen on the saga ‘1 Train’. Featuring a veritable ‘who’s who’ of immensely talented young artists today, anyone can get excited about this epic. People will certainly have differing opinions on who kills it on this song (I say Danny Brown), but you can’t deny that infinite star power is on show.

Ultimately, something sets A$AP Rocky apart from the crew he himself amassed for this release. He stands alone as the guy who can play for both teams, combining blistering hard-hitting verses with catchy club anthems. This newly discovered chameleon ability ensures that Rocky will have a long shelf life in the industry in the future. Long Live A$AP

Leaking a month before its release caught a lot of people unawares, not allowing a lot of hype.

Some passenger tracks lower its score, but an extremely strong release from an artist on top of his ever-changing game