Main Menu
"In today’s fickle music scene, few bands reach the six-album plateau, and even fewer do so while maintaining the integrity of the sound that defined them upon their inception, while still managing musical progression and ingenuity. Today, Buffalo, New York’s Every Time I Die will release Ex Lives – its sixth studio LP. Having followed […]"


In today’s fickle music scene, few bands reach the six-album plateau, and even fewer do so while maintaining the integrity of the sound that defined them upon their inception, while still managing musical progression and ingenuity.

Today, Buffalo, New York’s Every Time I Die will release Ex Lives – its sixth studio LP. Having followed the southern metal rockers for over ten years, it’s not difficult to understand why fans continue to show their support. Surely, it’s a testament to the band’s sound when fans can say they’ve stuck with it from their pimple-popping high school days all the way through to their mid-to-late 20s, even with many of them considering any band in a music genre that ends with “core” unlistenable. But Every Time I Die is the exception to this modern rule, so let that be the only time ETID is mentioned in the same sentence as the word “unlistenable.”

Ex Lives begins in a way that can only be described as reminiscent of the first time I popped Hot Damn into my CD player. Although, musically, “Romeo A Go-Go” sounds nothing like Ex Lives’ opener “Underwater Bimbos From Outer Space,” they’re both ferocious and end in a way that already has you looking forward to the album’s second spin only having gone just one song deep.

Vocalist Keith Buckley’s a cappella wailing at the conclusion of “Holy Book of Dilemma” only heightens the drowned out chugging intro of “A Wild, Shameless Plain,” before giving way to the rock-tinged “Typical Miracle.”

Buckley’s impressive vocal range is elaborately showcased in “I Suck [Blood],” a song that offers a healthy mix of clean vocals, raspy screams and dual guitar riffs, courtesy of guitarists Jordan Buckley and Andy Williams, that take a page straight out of New Junk Aesthetic’s “Wanderlust.” 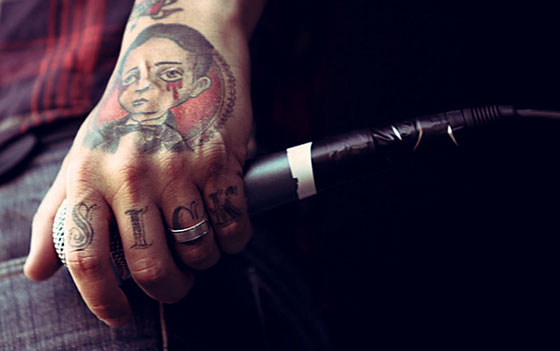 The one thing I always look forward to hearing in an Every Time I Die album is the token ‘clean vocal-dominated’ song. On Gutter Phenomenon, it was “The New Black.” On The Big Dirty, it was “We’rewolf” (honourable mention to “INRIhab”). And, of course, “Wanderlust” was New Junk Aesthetic’s clean jam. For Ex Lives, “Revival Mode” is undoubtedly that track.

By now, any fan of the band will tell you it’s a perspicuous feeling for the listener to be in the middle of an Every Time I Die listening experience that intermixes aggressive head smashers with songs that are primed to be rock anthems for a party you can only dream of attending. “Revival Mode,” which features very little screaming, is one of the album’s best songs, and somehow maintains a level of darkness not offered on past singles – lyrically, vocally, and musically speaking.

Ex Lives’ latter tracks “Drag King” and “Touch Yourself” bring the established quick pace of the album back to the forefront. But it’s the closing song of the album that has this reviewer already craving more new music from Every Time I Die. “Indian Giver” wraps up the album in a way no one could have imagined; it reminds the listener how deliberate and carefully thought-out the sequencing of tracks is on Ex Lives.

One of the more gratifying aspects of Every Time I Die is its circumspect adeptness to its growing fanbase over the years. Before the release of Ex Lives, the band released short “making-of” clips, none of which hit home more than the one narrated by Andy Williams. In it, Williams briefly discusses the image of the band while giving mention to all the fans who’ve stuck with the guys over the years. It’s a sincere and somewhat isolating speech. Isolating because this statement also applies to many people who once enjoyed the band, but fell off the wagon at some point. It painted an image of the sort of people who were once fans of the band years ago but consider themselves too “musically evolved” (hip) to listen to Every Time I Die in the present – the kind that would almost try to make a person feel a shameful guilt for listening to this band nowadays.

As far as this writer is concerned: guilty for listening, I am; ashamed of continuing to listen and support such a good band, I am not. I’m a fond believer that it’s because of an evolved musical taste that so many people are still able to enjoy Every Time I Die’s natural progression over the years. For those who can appreciate it, Ex Lives is a gift from a band that still appreciates itself for what it is and its Ex Fans for what they aren’t — loyal.

Justin describes himself as a writer and filmmaker who enjoys hammering away on the guitar during spare time. Professionally, he’s a Sports Listings Reporter for TV Guide in Canada.