“Can it be called a return if one never actually leaves?”

An example of the wide-ranging tastes of Has It Leaked’s userbase, Rihanna’s new album was top of the request lists this week for her 7th release in as many years. If only your favourite artist was that productive?! Does she have a lot more to say, or just a lot more money to make?

Can it be called a return if one never actually leaves? Exactly a year after the release of Talk That Talk (Fun fact: Her last 4 albums have been released on the 18th -20th of November for the past 4 years: Clockwork), Rihanna continues being present  at the forefront of pop divadom with ‘Unapologetic’.

‘Fresh Off The Runway’ sets the tone for the majority of this album. Self-serving, cocky and foul-mouthed in her approach, Rihanna introduces the current attitude she’s rocking at the moment, that she’s young, rich, and going to do what she likes, all to a stuttering ostentatious synth loop. This song as well as ‘Power It Up’ and ‘Numb’ (Marshall Mathers taking an uninspiring turn as Slim Shady rather than Eminem regrettably) has some obvious Def Jam influences with hip hop stylings in the back-up vocals, looped sample choices and production emphases. 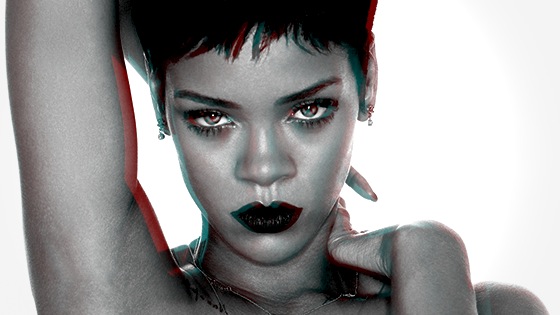 I don’t know who Future is, but his piece, in the frankly abysmal ‘Love Song’, impressively proves that someone can actually be hopelessly off key while in autotune.

While on the subject of featured artists, one would think that Def Jam and Rihanna would be able to pony up some actual worthwhile contributions from their ranks and connections. I don’t know who Future is, but his piece, in the frankly abysmal ‘Love Song’, impressively proves that someone can actually be hopelessly off key while in autotune. Mikky Ekko (?!) is anonymous on Stay. David Guetta’s ‘contribution’ on ‘Right Now’ marks it out from the rest of the album in no way whatsoever, apart from possibly the particularly mindless lyrics. (Although my personal favourite in inanity comes from Nobody’s Business as upstanding young gentleman Chris Brown utters, “Every text becomes infectious/ Let’s make out in this Lexus.”)

This album is an exploration into the inevitable paradigms of pop music today. A lot of the things I could tell you about this album, you could have inferred yourself from the state of current pop, and how predictable and apparently homogenized its music has become. You have your standard David Guetta/Kanye West cameo on ‘Right Now’/‘Jump’; your Dubstep infliction; songs about cars, money and sex; your autotune; the YOLO mentality. See how many tracks you can spot that start out with the ‘thoughtful slow understated piano chord’ repeated over and over. Admittedly it has already become redundant to point it out, but some elements of this and most contemporary albums are lifted and shared amongst the general population.

I have been known to defend dubstep after its recent perfusion into popular music. I believe it can be used to great effect in anything from electronic dance music to rock and pop if utilized smartly. On this album, we can see it used in a subtle and effective way, defining the smouldering intensity of ‘What Now’ and the party atmosphere of ‘Jump’. We can also see it used in an infuriatingly over the top grating way on ‘Lost in Paradise’ (Honestly, ‘Bass Slap!’?!). There’s a fine line, that Rihanna manages to straddle while casting out for miles on either side.

However, at the times where Unapologetic is stripped back, when the sirens, lights and lasers take breath, there are some gems here. In ‘What Now’, we see a humble, genuine Rihanna confiding in the listener her fears for the future, and underlying feelings of dread despite her life of luxury. A change in Rihanna’s vocal style in this and one of the album’s few other bearable songs ‘Diamonds’ mark a change from her usual sultry, smoky Barbados drawl to a lilting vulnerable falsetto, along with a simplistic iambic pentameter song structure. Tracks like this display the fact that Rihanna does not need the same level of flash and bang that other artists rely on, yet sadly she still sticks to them…
When Rihanna first came on the scene, she had this unique singing style and lexicon, refreshing naivety and supreme talent. Yet now it depresses me to see that for the most part she has now fallen in with the wrong crowd. And she is quite namely unapologetic about it.

Can this girl possibly have enough good material to keep springing upon us?

Not all bad, but when it rains it pours…