Main Menu
"  Review: Savages – Silence Yourself by Matt Doyle   The band’s meteoric rise can only accurately be described as “efficient”. Only formed in early 2012, Savages quickly made a name for themselves in the underground British punk scene due to their blistering live performances and surprising wit. After universal hysteria for their EP ‘Husbands’ […]"

“English post-punk, all girl, 4 piece, Savages have been on a fast track to the forefront of the music scene.”

The band’s meteoric rise can only accurately be described as “efficient”. Only formed in early 2012, Savages quickly made a name for themselves in the underground British punk scene due to their blistering live performances and surprising wit. After universal hysteria for their EP ‘Husbands’ at the end of 2012, new found fans were buzzing for the release of the debut album ‘Silence Yourself’. First however were the small matters of lauded live appearances at Coachella and SXSW, and the announcement of further worldwide tours and festival gigs. Savages definitely skipped a step here…

Already, Savages has the air of a confident experienced band. ‘Silence Yourself’, the album comes with a thought provoking epitaph on the cover, urging the listener to condemn this new world ‘in an age of many stimulations’ and to tear down our over-complicated selves. The mantra and aesthetic image (Mainly wearing black during live performances even in the depths of California heat) of the band is purely that of simplicity and deconstruction, and it’s one that they are clearly committed to. 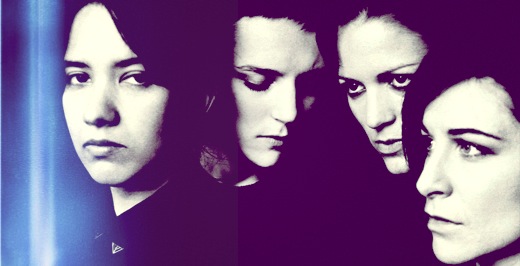 ‘Silence Yourself’ opens with ‘Shut Up’, in true Savages fashion, catching us unawares with its immediacy and raw intensity. The classy domineering bass and Jehnny Beth’s aggressive magnetic drawl alternately absorb the listener through the reverberating guitars. By the time ‘I Am Here’ is in full flow, with its explosive chorus, juxtaposing against the audibly rustic fret-board squeaks and howls from Beth, there can no longer be any doubt that this band are something special. While listening to a debut as self-assured and as urgent as this, it calls to mind what the first listeners of Joy Division and Public Image Ltd must have felt.

‘City’s Full’ is the first sign of a let-up in the praise for Savages. The full album is available to stream on the band’s website complete with full lyrics, however this feature is doing a slight disservice. On some of the tracks, notably this one and ‘Waiting For A Sign’, the lyrics are uncomfortably inane and at times cluttered (“Who blew the flames out of your eyes? / why do you treat yourself so bad?”). Although Beth’s vocals are absolutely seductive and perfectly conducive to her surroundings, there’s just too much of them at impromptu moments, whilst covering banal topics. In Savages hurried, fast-tracked existence, they smack of a first date, earnestly talking to try and fill any ‘uncomfortable’ silences.

As the album progresses however, there are countless instances of the anthemic nature of this band seeping to the surface. ‘No Face’’s frantic rumbling guitar from Gemma Thompson and another of Ayne Hassan’s ever impressive and switched up bass lines are testament to this. Unfortunately though, vocals tend to once again act as more of a distraction than anything else in a track such as this. ‘Silence Yourself’ never feels like it embraces the post-punk moniker that Savages fans are so eager to place it under. The outro for ‘Waiting For A Sign’, featuring a guitar shredding instrumental sect (recalling some of the heavier aspects of My Bloody Valentine’s recent release) and sampled electronic squeals, is our first taste of it and this leads into the eerily minimal ‘Dead Nature’. Further explorations into strange territory are taken in the frenzied Hit Me, but this foray, though short, is painfully dire.

a timely injection of perennial class back into punk

‘Marshal Dear’, the album closer, stands out from the crowd in its reserved nature and inclusion of the only instances of saxophone and piano in the LP. Beth channels Karen Oh of the Yeah Yeah Yeahs in her bleakly poetic diatribe (“There are suicides in every dream”) in a strange open-ended finale compared to the initially agitated, soon overwrought Husbands previously.

Overall, despite its flaws, Silence Yourself is a timely injection of perennial class back into punk. Savages are a new band who have a focused idea of their direction and worth, and no hesitations to communicate it. Look out for their live performances this summer; It could very well be a “I was there way back when…” kind of event.

Somehow managed to be overhyped in their short existence, the early album stream being a service to their mounting fans