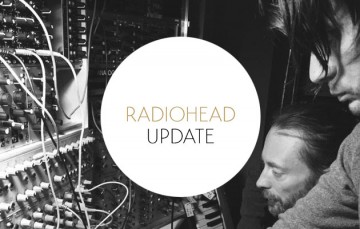 Update (June 17th): Johnny Greenwood spoke to 3voor12, a dutch music site, about the recording sessions for Radiohead’s upcoming album. Apparently, the band is back yet again, working in sessions. “We didn’t do anything together for too long, so restarting took a lot of time. We’re working in periods now. This afternoon, Thom and I will work on a song we started yesterday, see what it will lead to.” says Greenwood.

He also mentioned the band is working on an old track, called Lift. “When the idea is right, it stays right. It doesn’t really matter in which form.” referring to each Radiohead album always including an old song. Embedded below is the song from an old gig, remastered by a fan. See various unreleased tracks in the original article.

Original story: As the band entered the studio back in September, we’ve only been treated with Instagram photos from Radiohead’s recording sessions. Despite being one of the most difficult, experimental mainstream bands, there’s a lot of fans anticipating the ninth album. But now, band member Philip Selway has revealed how the sessions are coming along, thanks to an interview with Drowned in Sound.

According to Selway the album “[is] coming along nicely… We worked throughout the autumn up to just before Christmas, and now we’re just taking some time away for other projects”.

He assures us that while the band is taking a break to work on side projects, they are returning to the studio in March to continue work. “It’s by no means finished yet, so we’ve got a way to go. It’s been a productive time though.”

Selway hesitates to give us a release date, indicating that the album could be pushed to 2016. “I wouldn’t want to start to predict that kind of thing in a Radiohead schedule because you can find yourself six months down the line saying “I wish I hadn’t have said that actually!”

Below is our previously released video with a few unreleased songs which might make the album cut. It’s unlikely, but at least it proves that Radiohead’s b-side material is still better than most bands a-sides.