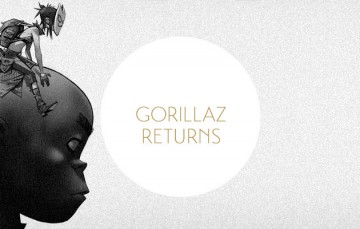 Update, October 13th, 2015: It’s been relative quite since Gorillaz first announced their comeback early this year. Now Jamie Hewlett has once again confirmed that the band is working on new material. He even states that we could get new material before the end of the year. “He’s quite prolific, Damon – I don’t think it will be long!”. He also concluded that 2016 will be the year of Gorillaz, which definitely included live gigs. Hewlett will be showcasing his art from 18 November to 2 December in London at the Saatchi gallery.

Original Story: Late last week, Gorillaz co-creator Jamie Hewlett, confirmed that Gorillaz will in fact return. He also posted three new artwork pieces on his Instagram account of fictional band members Murdoc and Noodle. Damon Albarn, the other half of the Gorillaz venture, is currently busy composing a musical, and while he’s finished promoting and touring his solo album he’s got an unfinished Blur album as well.

It’s been four years since Gorillaz last album, The Fall, so we thought it would be appropriate to remind you all why Gorillaz return is set to be one of the most anticipated albums this year, if it makes the 2015 cut.

Below is an unofficial mix of unreleased material