Is Aphex Twin Faking His Own Album Leak?

In the last few days there’s a been a bunch of fake leaks of Aphex Twin’s upcoming album SYRO floating around. While almost all of them have been identified as renamed albums by other artists, one of them is actually unidentifiable. And while the album, as one fan puts it, “[is] definitely not worthy of flying a blimp before release” and most likely fake – It has sparked an interesting discussion. Is Aphex Twin trolling us? 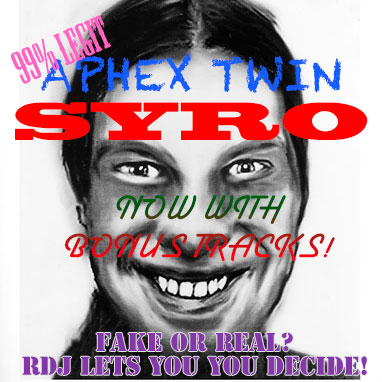 As a member of the famous private music torrent site What.CD puts it:

“RDJ is a renowned troll. It’s not beyond the realm of reason to think he might have leaked this as a joke. [and] As many have noted here, there are many releases that, when first leaked, people were certain were fake, but they turned out to be real (Daft Punk being perhaps the most recent example). Personally, I’m near certain this isn’t the case, but it’s not impossible that Aphex could have suddenly lost nearly all his creative excellence.”

Since the album isn’t identifiable, it could also lead to several bedroom DJ’s producing and spreading other albums in the name of SYRO. One thing is for sure, Richard David James is likely to find all of this hilarious. And while it makes it a lot harder to answer the question Has it Leaked? – It makes the wait for the, supposedly real album a lot more exciting. Unless this album turns out to be the real thing. And while on the subject, I recommend reading our article on the Most Odd Album Leaks.

The unidentified leak doesn’t match up with the official track times announced today. Follow all news regarding SYRO on our Aphex Twin album page.