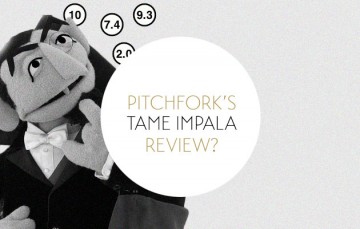 Update: Pitchfork’s Review is Out

I’m blown away. With over 1,500 votes, you predicted Pitchfork’s score of 9.3. While we’re reporting album leaks, ahead of their official retail release, we can now add “totally see into the future, man” to our skill set. Thank you guys, we are all Golden Gods. Now, does someone have some Wikipedia skills so we can all go down in the history books?

Original story: As we’ve discussed before, there’s a lot of us who love to hate Pitchfork. Pretentious and condescending at times, I’m one of those who can’t help myself, I do read the reviews. Under those shades of cool, there’s often a very talented writer. But its a mixed bag, either I get to be intrigued by a review or feel the blood boil inside of me when they dare to give one of the best records of the year a 6.0.

“this is Pitchfork gold”

Because whatever you feel about Pitchfork, their score system is hilariously stupid. Dumb (what’s the difference between 4.5 and 4.6) and fun (it’s easy to laugh at hipsters and numbers are easy as 1-2-3).

And right now Pitchfork’s staff are gearing up for their #1, favorite indie darlings, Tame Impala’s new album. We all know this is Pitchfork gold. But as with all trend setters, hipsters, journalists, connoisseurs, douchebags – Whatever they might be – The tides must turn someday. NME is well aware that Arctic Monkeys will write a bad album eventually, having learned this the hard way by giving all Oasis albums great reviews (hindsight!). And Pitchfork, they’ve got to be ahead of you guys – They set the scene, they set the score. If they are powerful enough to launch chill wave, and kill it one year later, just imagine what they can do! Kill vinyl, again? Bring back the Zune? Who knows!

So let’s be as stupid as Pitchfork’s scoring system, let’s guess what they will give the album. And yes, voting before the leak eventually happens is the ultimate hardcore way to do it! Four singles in, we’ve got this guys!

Breaking update! Rolling Stones just received a 10/10 for their reissue of Sticky Fingers. With sentences such as “the material here is about as good as you will get”, there’s now way to tell how this will effect the upcoming Tame Impala review. Some might say this is “only” a reissue. Some might say Pitchfork have stored numbers for months, and are prepared to dish out any number they see fit – Others are worried there aren’t “enough numbers to go around”. Who knows? But it’s clear, this forthcoming review will go down in the history books. Probably as a 8.7 as far as historically significant. Best new history.

Pitchfork’s Album Score for Tame Impala’s Currents will be…

Tame Impala’s Currents is out July 15th. Pitchfork gave their debut album 8.5 and the follow-up 9.0. Both awarded with “Best New Music”. I will myself, review the album once its out – Including Pitchfork’s review, and give just about everything a score, including your votes – On my podcast. Until then. Let’s be free of numbers, words or reviews, and just stick with our incredibly limited minds!